So, I figured it was about time to put pen to paper (or keys to screen?) and record my low carb (LC) experiences. I’m doing this in the hopes that it may help others, provide inspiration, or at least help you waste just a few minutes more on the web instead of doing the dishes.

First things first, here’s the Cliff’s Notes version of my story, for those that just can’t wait to get out and get started: 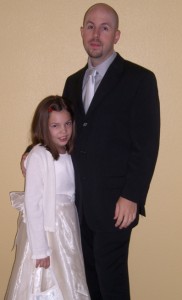 Are you still alive [and/or well]:

Should I do it?

Read the story, research, decide for yourself! I’m also going to post a FAQ and Links very soon…

If you’re still here at this point, I assume you want to know more, so…
History
I’m a white male, 27 yrs old, handsome as they come (assuming you didn’t look at the pictures yet) 😉 I’ve always (at least in my conscious memory) been overweight. Now granted I have pictures as a small kid that show me pretty skinny (and happy..coincidence?) but for all intents let’s just say it’s been a life long ordeal.

Of course, you get all of the baggage that goes along with the condition: low self esteem, poor health, social ostracization. Needless to say, it wasn’t a happy time of my life. That’s especially sad, considering it’s really all of my life 😉 In high school (maybe 1994), I managed to lose about 30 lbs one year, and while I can’t remember how much I weighed let’s guesstimate a good 170. Not bad for a fully grown teenager.

People asked me all the time how I did it, and I couldn’t tell them then and honestly don’t know to this day. I recall doing a fat limiting technique, something awful like 16g a day (I believe doctors recommend 60g), and I played some tennis, so between the two it probably helped quite a bit.

“But wait! You had met your goal! What happened?”

Well, one can only assume the same thing that always happens with severely restricted diets: I got tired of the choices, and when I let the foods slide the exercise went with it. It wasn’t maintainable!
Fast Forward
So years went by and of course I gained back the lost weight and more. I didn’t put in a really solid effort at weight loss again until 1999, when I was about 23 or so and a strapping 287 lbs(!!).

I knew I needed to lose weight, and yeah, I tried probably a hundred times a year to cut a calorie here and there but nothing with my soul in it. We tried walking the neighborhood at night, etc, but it always died off after a week or two.

That’s when I found the Dr. Atkins New Diet Revolution (DANDR) book and was blown away! He laid out very plausible explanations (although you might argue that I’m somewhat gullible anyway ;-)) that really made sense, and got you excited about the opportunity ahead of you! What was great for me was that the food selections were rigidly defined for induction, and the initial weight loss meant that you saw impressive results quickly…perfect for someone impatient like me.

I set my goal at 240, thinking that surely after losing 40+lbs I would be happy and healthy. So I went through induction, lost my 12 lbs, and I was hooked. I stuck to the diet, quite rigidly, for almost a year (with some minor slips here and there). In those “olden” days, there weren’t really any LC products you could buy, so I lived high off the hog (so to speak) with veggies and lots of fats, and cooked more chicken breasts in my George Foreman grill than I care to remember.

The folks at alt.support.diet.low-carb (ASDLC) were invaluable in terms of experience and inspiration and I like to think I contributed a bit as well 🙂 I lost the 40 lbs, and I felt like a new man in many ways. My wife constantly complimented me, and my coworkers and friends talked about how I was “melting away”!

I was pretty happy, but I really didn’t accept at the time that I was still far too overweight. So after about 9 months I started to let myself go. I also still saw LC as a short term diet and not a way of eating/way of life (WOE/WOL). I ate the same things too often, didn’t cook interesting meals, and in general burned out on the limited choices I thought I had available to me. Time came and went and I put back on 10 or 15 lbs, but I’m glad to say I never strayed too far.

The most important lesson I took away was the role that processed sugar and flour played in weight management (at least for me), and when not too inconvenient I made eating choices that didn’t include too much of either. I think that really helped me maintain most of my loss until the next part of my story picks back up.

Side note: I did have my cholesterol, etc., numbers checked at the doctor at the end of this first stint, and the doctor himself called me with the glowing results: he said I was perfect in every category!
Fast Forward more!

(ed. note: I wonder if we will lose the term “fast forward” from our vocabulary, with everything going digital (DVD, CD, etc))

In the end, it took only $50 to get me off my can and get going again.

Late in 2003, right before Christmas, the guys at work decided to have a weight loss contest in the spring. Basically, everyone who didn’t lose 10% of their body weight in a 4 month period would have to kick in $50; the pot would be split among the winners. We adjourned for Christmas break and I didn’t much think about the start of the competition, coming up in Feb’04. I needed to lose 10% of 247, so that’s 24lb’s in 4 months, 6lb’s a month for those mathematically challenged among us.

I started the contest in earnest, thinking that I would try portion control first, and then I knew that I could “cheat” by doing Atkins/LC if I needed to squeeze a little extra to make the 10%. In the first two weeks, by doing portion control, I lost about 4 lbs but wasn’t really satisfied all of the time. I also didn’t count calories so chances are they were still pretty high.

I decided to “kick it up a notch” and start LC again, and figured that I might be able to nail a 30lb loss or so over the months. That would handily let me get my $50 back and even show off a bit at the same time 🙂 Internally I adjusted my 24lb target to 200lbs, again thinking I’d be happy at that weight.

I started LC with a vengeance, working induction for almost 2 months before I started adding small bits of carbs back in. As you probably know, by this point almost 1/4 of America was jumping on LC also, so there were MULTITUDES of LC products coming out. Many were junk in the truest sense of the word, replacing sugar and white flour with even worse artificial ingredients (someone in ASDLC called them “Frankenfoods” ;-)), calories, sodium, you name it. (Speaking of ASDLC, they have again been absolutely key to success, answering questions, providing tips, and even the occasional mean spirited poster to give you the kick in the pants you need ;-))

However, at the same time there were/are some great products, like low-carb tortillas which are handy replacements for bread in many cases. I have no qualms about saying that the assistance of the food industry made this go around a lot easier. Another great thing is that–both out of greed as well as goodness of heart I’d imagine–many manufacturers are now more clearly labeling the carb content (and contents in general)!

Of course, man was not meant to live on processed and packaged foods, so I’ve been cooking quite a bit more this go around, and it has certainly assisted in my “keeping on the path”. Atkins.com has amazing recipes, and tools like shopping lists and a progress tracker; I highly recommend you check it out!

I’d like to think that–in addition to the amazing weight loss–the most valuable thing I’ve taken away from the WOE so far is the newfound understanding of food and nutrition in general.

Well, if you saw the pictures you already know, but the answer is a resounding yes! By the time the bet ended I had already lost 40lbs, and at the time of writing this article I’m down to 182; I’m only 7 lbs away from my new NEW goal of 175! That will make a whopping 72 lbs I’m no longer carrying around with me!

What about the other guys?!

Well, through a combination of extreme exercise, caloric reduction, and (not kidding) dehydration techniques the night before weigh in, 3 of the other 7 guys made their goals. So basically, we each got back our $50, but…(insert cheesy music here) I got back much more in the form of a new lease on life, new happiness, and a better outlook for my future! 😉

I’ve gone from a [tight] size 42 pants and XXL shirts to size 36 being too loose in many cases, and mostly Large shirts filling my wardrobe. Speaking of wardrobes, what a change it is to go shopping and actually enjoy finding things to try on!

I got my health numbers checked again about 5 months into my “new” WOE and once again the doctor happily reported that I was stellar in every category!

Anyway, this has gone on for far too long, and I’m sure I’m missing many of the things I wanted to get recorded, so consider this a living story that I will update over time. If you have any questions or comments for me, shoot me a mail at lowcarb AT richardgoodwin DOT com. As mentioned early on, I’ll be putting up a FAQ page, and a Links page. In addition, I’m thinking about adding the capability for readers to create their own blogs and/or pages here on my site; if there’s any interest, please note it in the comments and/or send me a mail 😉